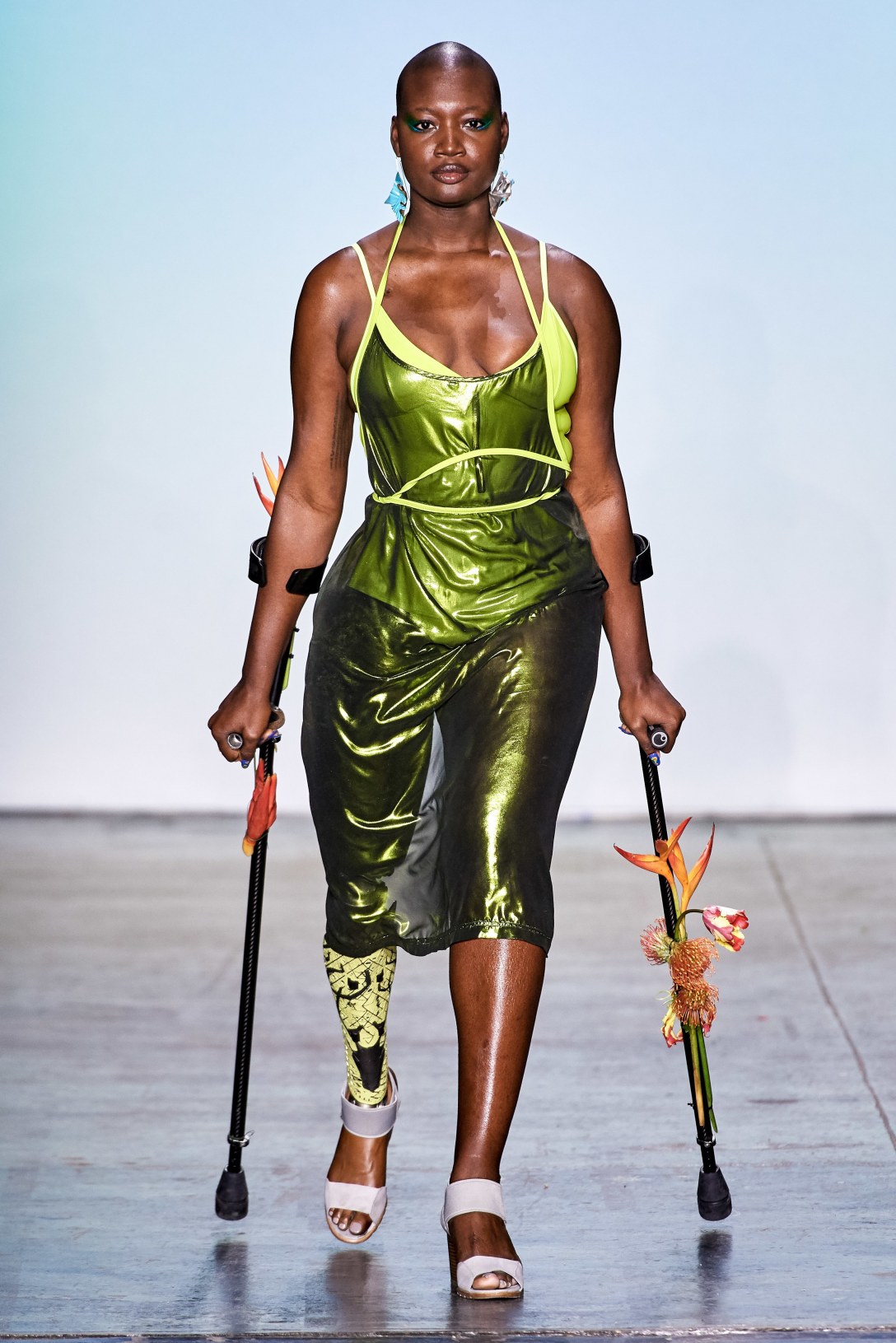 I’m actually amazed at myself that I managed to pull this post together – I’ve missed a few weeks due to various deadlines at uni and a family holiday meant I couldn’t possibly do anything like work! Anyways, we’ve conveniently reached the end of Autumn/Winter 2019 Fashion Month just as I’m ready to write again, so I thought I’d round up some of the highs (and lows) of the last four weeks.

One of the shows that caught my eye in New York was the Chromat neon extravaGANZA. Vibrant, tropical Miami heat was the theme for this swimwear brand’s show – named ‘Climatic’, it was inspired by their opening of a second studio in the coastal city, which according to the brand is ‘on the front lines of climate change with rising water, increased flooding and toxic red tide’. The clothes themselves were made from recyclable materials such as bio-based TPU and Lycra made out of old fishnets, utilising dead stock to create a joyful collection. Becca McCharen-Tran challenged the audience to consider how images of ‘ethical’ consumerism often centre around wealthy white women; she sent models of all types down the runway, including Mama Cax (pictured above), an amputee, model and activist, in a celebration of the body in its infinite variety. As Man Repeller pointed out, it ‘gave us everything Victoria’s Secret couldn’t’.

Hopping over to London, we saw the second Queen Elizabeth II Award for Design presented by the Duchess of Cornwall to menswear designer Bethany Williams. The Duchess said that the award “goes to a designer with a social and environmental conscience. She brings ideas and people together, and puts change for the good at the heart of her business”; following in the footsteps of Richard Quinn, the first recipient of the prestigious award, Bethany Williams is a trailblazer for ethical approaches which uplift marginalised people. Not to mention, her collection is filled with incredible artistry, imagination and innovation – it was named for Adelaide House in Liverpool, one of just eight rehabilitation centres for female ex-offenders in the country, and featured a suit woven from shreds of the local newspaper the Liverpool Echo.

Now this one’s a toughie. One of the most memorable (and meme-able) shows from the entire month was Jeremy Scott’s for Moschino. You’ve probably seen pictures of the game-show runway, bouffant hair and – who could forget – that TV dinner monstrosity of a dress; a wild exploration of the most excessive aspects of consumerism all packaged into one huge, glamorous show, was this clever satire or just a bit too on the nose? The self-styled King of Camp, Jeremy Scott, went all out on this one and some loved it: Alexander Furywrote that there were ‘lots of levels to this performance – the demise of television watching and the associated advertising revenue in the age of the internet; the ethics of rampant consumerism; the power of escapism’. Yet is the message really that powerful when you are… um… selling a product… that can only be purchased by… uhh… 1% of the global population…? It’s a super-fun collection which is very easy to love, especially when everything seems grim, but perhaps we should think a little more critically about what commentary on capitalism can really mean when it’s designed to make you spend a ridiculous amount of money.

I was particularly interested in Paris this season because of their five year plan to become the world’s sustainable fashion capital. Also, Stella McCartney showed her collection in the city – did you think I’d miss her off the list? Hard no – my fave made waves in Paris by inviting the one and only Oprah Winfrey to the show to champion her ‘There She Grows’campaign to save the Indonesian Leuser Ecosystem. Dedicating a tree to her mother, Linda, she then passed on the challenge to Gwyneth Paltrow and the nominations quickly spread across social media. Less trend-focused than most, the collection itself was designed to be passed down the generations, with a focus on relaxed, androgynous tailoring. Favourite piece? The trousers in Look 13: they are to die for.

Finally, a word about the man himself, Karl Lagerfeld. His death in the midst of fashion month was felt around the globe, with tributes to the designer flooding in. Some, like Jameela Jamil, were more critical of his legacy, but none could dispute his enormous impact on the world of fashion. In Paris, he was remembered by his last show for Chanel: a beautiful alpine fantasy brought to life in the centre of the city. For the brand, this marks a significant milestone, with little-known insider Virginie Viard named as Lagerfeld’s successor (the first woman since Coco herself!); her predecessor was reticent on issues of sustainability, so I’m excited to see whether Viard will make this more of a priority.

It’s arrived! Kudos to @ruby_beard_ for putting together such a beautiful record of creative work during lockdown - so exciting to see my work next to such talented contributors ✨
Although it’s easier to remain silent out of fear of embarrassment or saying the wrong thing, the words of James Baldwin are ringing in my ears. I want a permanent post on my grid to say: I know that I have to do the work, to learn to be better, to understand the systems that hold people down in this country and across the world, and, further, to engage in the dismantling of those systems.
Today’s outfit is inspired by all of the suburban dads out there currently deprived from showing off their tong-wielding, burger-flipping prowess to a packed garden of awe-inspired onlookers 🍔
I have returned from a fairly long hiatus with more fashion musings, now live on thegreenmode for your perusal ✨
It’s been nearly 21 years since @alexandermcqueen spray-painted @shalomharlow in the name of fashion - but are runway shows still relevant, especially when we’re facing catastrophic climate change?
Here’s to new shoots in the garden (and the playground they represent for curious cats) ✨